This article is a stub. You can help The Girl From Tomorrow Wiki by expanding it.
Alana is a fourteen-year-old girl from the year 3000. Alana's parents live on Titan, Saturn's moon. They sent her to Earth to be educated. On Earth, she has guardians who teach her the techniques of how to use the Transducer, so she can achieve her ambition of becoming a Healer. Alana has three distinctive dots on the side of her face in the temple area.  Taken in by the Kellys on arriving in 1990, Alana is given the name 'Alana Turner' and passed off as Irene's niece to avoid suspicion 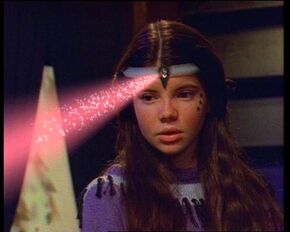 Full Name
Alias
Gender
Female
Age
14 years old
Status
Birth date
Year of Origin
3000
Family
●   Mother:
●   Father:
●   Sister(s):
●   Brother(s):
●   Spouse:
●   Daughter(s):
●   Son(s):
Portrayed by
Katharine Cullen
First Appearance
List of Appearances
Arriving in 1990, Alana escapes, and later meets a teenager named Jenny Kelly, whose help she enlists in order to get back to the Capsule before it returns automatically to the future, leaving her stranded in the past. After thinking that the Capsule was destroyed, Jenny and Alana discover that it has been seized by Silverthorn, who is building his power and making vast amounts of money by using information from the Capsule's database, and will therefore not allow Alana to use it to return to her own time. Along with the help of Jenny's family and her teacher, Alana and Jenny must devise a plan to retrieve the Capsule while foiling Silverthorn's plans, so that Alana can return home to the year 3000.
Retrieved from "https://thegirlfromtomorrow.fandom.com/wiki/Alana?oldid=4071"
Community content is available under CC-BY-SA unless otherwise noted.